, (GLOBE NEWSWIRE) -- (Nasdaq: VYGR), a gene therapy company developing life-changing treatments and next-generation adeno-associated virus (AAV) technologies, today announced the appointment of , Jr., M.D., Ph.D. to its Board of Directors, effective , and a newly formed Executive Committee of the Board consisting of , , interim chief executive officer and Board Chairman, and , M.D., Ph.D., interim chief scientific officer and Board member. will work with Voyager leadership to help shape future strategies for the Company’s next-generation TRACERTM AAV capsid screening platform and therapeutic programs, and expand its external collaborations with scientific leaders and industry partners. The Company also announced the promotion of to chief operating officer, effective . As a component of this new role, will join the full leadership team in working closely with the Executive Committee, while overseeing Portfolio and Partner Management, IT, Finance, Communications, and Quality and Technology Operations.

“We are thrilled to welcome to Voyager. Al is a scientific visionary who led the development of multiple transformational therapies for serious neurological diseases. The Voyager leadership team looks forward to working closely with Al as he helps to inform long-term strategies for the Company’s TRACER™ AAV capsid platform, therapeutic programs, and external collaborations,” said . “Voyager has made important advances in identifying unique AAV capsids that have demonstrated strong potential to maximize efficacy in target tissues, and minimize off target toxicities associated with first-generation approaches. With industry-leading technology and a talented team, we are well positioned to harness the full potential of our TRACER platform with the goal of delivering breakthrough therapies to patients. Further, I am very pleased to announce the promotion of to chief operating officer. Robin is a proven and respected leader whose passion for patients is reflected in her deep commitment to Voyager.”

"Gene therapy is a compelling frontier of modern medicine. Voyager's core technology platform stands apart for its potential to address fundamental technical challenges that have limited the application of the modality. I believe that Voyager’s platform could usher in a new era of gene therapy and enable a new wave of meaningful treatments for serious diseases. Voyager’s research team has identified AAV9- and AAV5-derived capsids with unique tissue tropisms that have shown strong potential for medical utility across a range of diseases,” said . “I look forward to working closely with Voyager leadership to help extend the reach and impact of its technology to help more patients in need.”

joins Voyager following a prolific career in biopharmaceutical drug development. spent 23 years at Biogen where he identified and developed novel therapies for a variety of serious diseases. While at Biogen, served in positions of increasing responsibility, culminating in his service as Executive Vice President, Research and Development from to . He also served an eight-year term as Chief Medical Officer at Biogen from 2012 to 2020, and served an eight-year term on the Biogen Executive Committee from 2013 to 2021. Earlier in his career, held several senior executive positions at Biogen, including group senior vice president of development sciences, senior vice president of neurology R&D, and vice president of clinical development, neurology. Over the course of his tenure, he led the discovery and development, and regulatory approval of numerous medicines including: ADUHELM™, PLEGRIDY®, SPINRAZA®, TECFIDERA®, and TYSABRI®. earned a B.A. in human biology from , an M.D. from , and a Ph.D. in neurobiology from . He completed an internship in medicine, a residency and chief residency in neurology, and a clinical fellowship in Neuromuscular Disease and Clinical Neurophysiology (electromyography) at .

joined Voyager in 2021 following a 25-year career with and Sanofi Genzyme where she held a number of leadership positions, including Vice President of US and Global Business Operations, Vice President US Rare Disease Patient and Product Services, and Senior Director Finance. She also served on the board of directors and was a member of the Executive Leadership Team for three years.

Voyager’s TRACER™ (Tropism Redirection of AAV by Cell-type-specific Expression of RNA) system is a broadly applicable screening platform that allows for rapid in vivo evolution of AAV capsids (the most common delivery vector for gene therapy) with enhanced affinity for specific tissue types in multiple species, including non-human primates (NHPs). Initial data from the first of many libraries screened in NHPs demonstrated the proprietary capsid variants effectively penetrated the blood-brain barrier and achieved widespread biodistribution and gene transduction of multiple regions of the brain. Separate results have demonstrated the ability of certain capsids to transduce cardiac muscle. Voyager is proceeding with additional capsid campaigns to identify novel AAV vectors optimized for specific therapeutic applications.

About
(Nasdaq: VYGR) is leading the next generation of AAV gene therapy to unlock the potential of the technology to treat devastating diseases. Proprietary capsids born from the Company’s TRACER™ screening platform are powering a rich early-stage pipeline of new and second-generation programs and may elevate the field to overcome the limitations of conventional gene therapy vectors across neurologic disorders and other therapeutic areas. voyagertherapeutics.com        LinkedIn        Twitter

Forward-Looking Statements
This press release contains forward-looking statements for the purposes of the safe harbor provisions under The Private Securities Litigation Reform Act of 1995 and other federal securities laws. The use of words such as “may,” “might,” “will,” “would,” “should,” “expect,” “plan,” “anticipate,” “believe,” “estimate,” “undoubtedly,” “project,” “intend,” “future,” “potential,” or “continue,” and other similar expressions are intended to identify forward-looking statements.

For example, all statements Voyager makes regarding Dr. Sandrock’s intention to join the Company as a member of its Board, Ms. Swartz’s intention to assume the role of chief operating officer, the contributions and may make as leaders for the Company, the amount of time and the value of the contributions that will be furnished by to the Company as a member of the Executive Committee, and the potential for Voyager’s platform, including its novel capsids generated from Voyager’s TRACER screening technology, to have a positive impact for gene therapy development and the treatment of patients with medical conditions are forward looking statements.

These statements are also subject to a number of material risks and uncertainties that are described in Voyager’s most recent Annual Report on Form 10-K filed with the Securities and Exchange Commission, as updated by its subsequent filings with the Securities and Exchange Commission. All information in the press release is as of the date of this press release, and any forward-looking statement speaks only as of the date on which it was made. The Company undertakes no obligation to publicly update or revise this information or any forward-looking statement, whether as a result of new information, future events or otherwise, except as required by law.

Photos accompanying this announcement are available at: 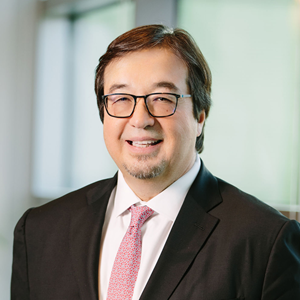 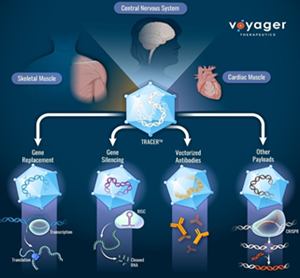 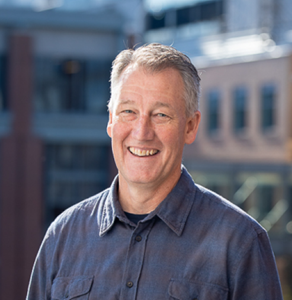